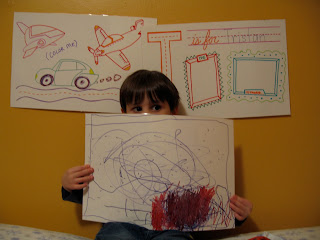 Belts are being tightened everywhere these days and our house is no exception. We love the handmade Christmas presents we receive from friends -- I wanted to come up with an idea that we could make for all our friends' brithdays throughout the year.

I chose placemats because have you tried finding personalized placemats ... that are affordable?! Or even just regular ol' education placemats? Most of the stuff in stores are character-driven. I finally found William a Solar System placemat at Kmart recently. (Hey Mom, Pluto's on here but it's just a rock.)

So we had the heavy paper and markers on hand. I used a placemat we had to determine size. Will colored the back while I tried to come up with fun things to do on the front. We got the finished drawings laminated at Staples (call around for the best price in your area). Now the birthday boys in this case will be able to use dry-erase markers to color and re-color* the activities (which include blank "frames" to draw in and practice handwriting areas).

*Note, the guy at Staples said to use alcohol to get the marker off the laminated surface. I'm betting that a Mr. Clean Magic Eraser will also do the trick. It's magic ... no, really it is!

So, considering that Solar System placemat was $2, was this project a money-saver? The total cost for 2 placemats plus 3 dry-erase markers came to $9. I could have bought a toy cheaper. But Will enjoyed making them and hopefully the placemats will occupy those long minutes waiting for dinner to appear on the table. At least, those minutes are long at our house!

We, of course, made one for Will. It was fun working on a project with him. He stuck with this one instead of abandoning me like usual. It took a lot of time on my end since I'm a perfectionist (hello, how hard is it to draw a plane?!) ... easily something that could be done at night while watching favorite shows.

So, it's a draw. We might make a few more this year if we have the time. If I procrastinate like usual, we'll be hitting the toy stores instead.

What about you? Any handmade present ideas to share?
Either ones you have made or received?
Posted by Christina at 11:26 AM