No more diapers for this ducky (or rabbit)


Boy, potty training took FOREVAH with Joseph. I thought it would be easier with Joseph since he had big brother to mimic. I was wrong. When Joseph showed the right amount of interest, we got out the little potty. It was a novelty for a few days, then he just stopped. Not interested and very, very resistant. I was asking the pediatrician when should we start to worry that something else medically was going on and the magic number was Age 4. So about two months before his fourth birthday, Joseph got with it and stopped screaming every time I merely suggested he might need a potty break. We're still having more accidents that I would care for (especially at his age) but he has passed the "long car trip" test and the "shopping in a store" test. He might even this summer pass the "get of the water and not pee in the pool" test. We all joke the baby pool is warmer for a reason. (No, no it's just very shallow and therefore less water to warm up in the sun. At least, that's what I tell myself!)
Posted by Christina at 9:31 AM 4 comments:
Labels: family, Joseph, kids, milestones, potty training, raising kids 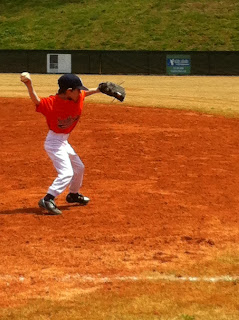 Awhile back on Facebook, I asked for opinions on little league. Specifically, would it warp Will for life if he didn't play at least one season of baseball? Because he was asking to play. Asking to play despite never picking up a bat or playing catch in the back yard. Asking to play despite already having a sport he loves— soccer. Asking to play despite the bank account not being as flush as it once was and playing sports ain't cheap. The consensus was let him play if he wants but don't force it. Heck no we weren't going to force it, but we did sign him up since he was interested. LESSON NUMBER ONE LEARNED: Trying new things is good.

I'd love to say he was a natural on the field, amazing at batting, begging us to play ball all day long. Those things are not true and when I tried to encourage extra practice in the backyard I was met with resistance. When asked why he wanted to play in the first place, his reply was "I imagined I would be better than I am." LESSON NUMBER TWO LEARNED: I'm not good at everything and to get better it takes practice, practice, practice.

It was obvious from the start that all the kids on the team besides Will had played at least one or two years. I swear one kid was probably born with a glove on his hand. Will on the other hand had to be reminded to pay attention to the ball and not the outfield weeds. His coaches have been great, taking extra time on batting and ball skills. Everyone plays so he wasn't left in the dugout. You could see improvement with each game. The last game of the regular season, Will got the game ball. After many strike outs in previous games, Will made contact each time at bat, bringing in several runs. His teammates were cheering, the parents were cheering. I was happy to see the teammate that didn't always want to throw the ball with Will in practice come out of the dugout to say "way to go." Will walked away that night saying "I helped my team win." LESSON NUMBER THREE LEARNED: Teams win and lose together. Yes, there are stars, but it's a team effort and everyone contributes.

Tonight, the Southside 7/8 Tigers will play the Storm in the first round of playoffs. We're the No. 1 seed because we only lost one game all season. Seriously, just one game. Crazy! The games are hard for me to watch -- I worry the ball is going to come to Will and he'll make the game-losing mistake. I wish he had a little implant in his ear that I could whisper loudly "Get up, for goodness' sake! Stop playing in the dirt!" Instead, I tried hard to let the coaches do all the yelling about paying attention. I pray he hits at least one ball per game because Will, and really all the kids, gets so frustrated when he strikes out. They are still young enough to wear their feelings on their sleeves. LESSON NUMBER FOUR LEARNED (by momma): Will has his own life lessons to learn that are out of my hands — lessons about actions having consequences and how paying attention is important.

After the season is over, I hope William will want to play catch in the back yard now and then. We'll catch a Birmingham Barons game or two this summer and he'll at least know what is happening on the field. Most important, he'll take these life lessons into whatever becomes his next adventure.