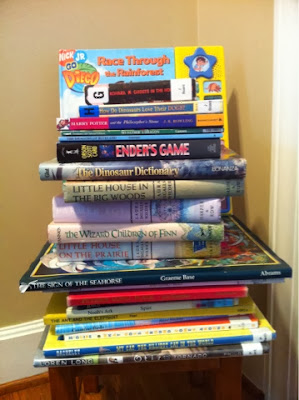 So, it was that day again. One of my favorite days. All those books just waiting for me to take them home. I don't miss the book sale at Emmet O'Neal Library. I probably should miss it (where will I put them? All the bookshelves are full!) but we all got stuff that makes us happy for no good reason and bringing home a bounty of books is one of mine.

Joseph was a true champ hanging out so he got to pick out a few that I myself would have left. For example, that Diego book hiding in the back. It makes sounds. Sigh, but hey, I can put up with it. And that dinosaur dictionary. Of course we needed that! Duh, mom. It's not like the other four dinosaur textbooks we have at home are enough. (I love that Joseph only reads truly academic dinosaur books. He doesn't want it dumbed down to a kid level.)

I didn't need to get any board books — while we still read the ones we really love, Joseph is too old for them. But the "How Do Dinosaurs ..." series is awesome and this one, "How Do Dinosaurs Love Their Dogs?," should come in handy. We finally decided on a timetable on getting a dog — THIS SUMMER! The second board book, "Ghosts in the House!" is adorable. The little witch catches all the ghosts, puts them in the washing machine and then proceeds to decorate the house. I found a review with pictures at Every Day is Like Wednesday.

Joseph IS the right age for picture books. So I brought home eight and Will picked out another, "The Sign of the Seahorse," for daddy because he's a fan of the author Graeme Base. I hope we'll fall in love with "Peter's Long Walk" (1953). A little boy playing with a fox and bunny and more?! Yes please! Find more pictures and a review at Once Upon A Bookshelf.

Other picture books worth a mention — "Counting Birds" by Alice Melvin (honestly, that one's for me), "What Goes Around Comes Around" by Richard McGuire, "George Shrinks" by William Joyce and "Noah's Ark" by Peter Spier. Apparently that "George Shrinks" is very well known (even a TV show!) but this is the first I've seen it.

Once again I wasn't sure what to get Will — he's such a one and done reader that I'm on the hunt for books he will re-read again and again. He is liking the "Nate the Great" and "Stink" series but those can be had at the library. I got the first three books in the "Little House on the Prairie" series. Bonus — they are hardcover 1953 re-issues (but these copies actually printed in 1961) with pictures by Garth Williams. I hope he will like them. But if he doesn't, I hope he'll at least appreciate the historical aspects. What a different time to live in! Just re-reading Chapter 1 of "Little House in the Big Woods" makes me appreciate the grocery store!

Also for Will, two of the books in the "My Father's Dragon" trilogy. Now to find the missing second book. I first saw it reviewed on Vintage Children's Books My Kid Loves and it shows promise. If the glowing praise found on GoodReads is any indication, "The Wizard Children of Finn" by Mary Tannen should be life changing! Lots of folks recall reading it again and again. I also picked up "Ender's Game" which I'm going to read first. I somehow missed it growing up.

My favorite find of the day? The one that made me really happy? A British Harry Potter! The first book in fact — "Harry Potter and the Philosopher's Stone." Why did they change the name of the U.S. edition? Seriously, why? Can't wait to re-read this and see if I can find water closet instead of bathroom and lorry instead of trucks. I'm such an anglophile! 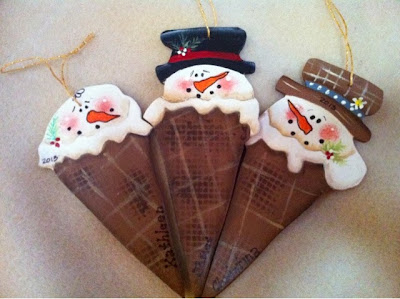 So how long ago was Christmas? Because honestly folks, Will's little blue tree is still the nightlight in the boys' room and the ornaments are still boxed in the hall waiting to be stored. Despite it being 303 days until Christmas 2014, I wanted to share what Aunt Catherine made for us in 2013.

You guys love what Aunt Catherine does. My "On the tree" post from Dec. 2011 is my second most viewed post ever. She didn't disappoint again — those "snow cones" are pretty darn cute! 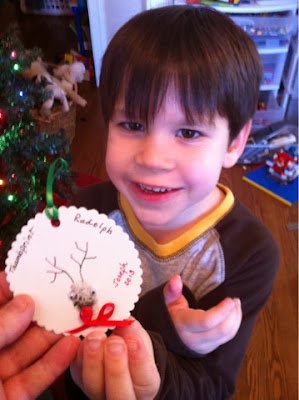 I realized a little late that it would be a great idea to take a picture of the boys with the ornament (or Mother's Day gift or Valentine's card) they made to easily answer the "how old were you when you made this?" question. So here is Joseph, age 4, with a very cute thumbprint Rudolph. 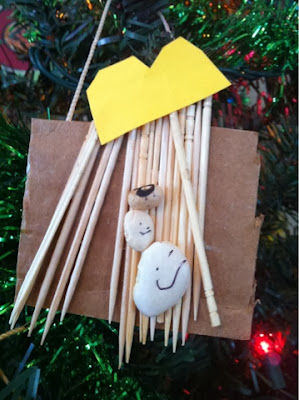 Will actually made this last year in first grade. It's now my favorite nativity. Does it get cuter than a  black-eyed pea baby Jesus? No, no it does not.
Posted by Christina at 9:05 AM 1 comment:
Labels: Christmas, family, Joseph, ornaments, Will 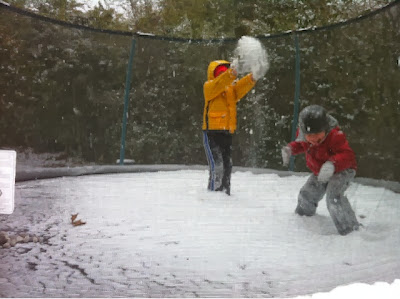 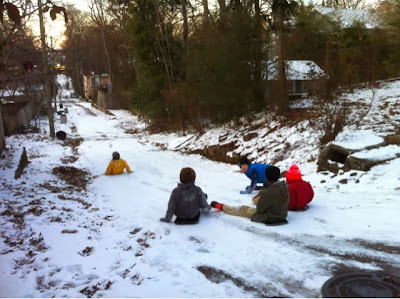 As I am typing this, the temperatures are in the 60s and heading into the 70s by afternoon. Less than a week ago I was looking at four inches of snow on the lawn. That is a crazy amount of snow for us. If we get snow it's usually just a few flakes that don't stick to anything. You'll say oh, it must be so nice to have temperatures in the 70s in February but check the barometer because a storm is coming. A storm with damaging winds and possible tornadoes. Winter to spring to summer and back to winter all in one week. No wonder we turn our meteorologists into weather gods as we seek guidance on what to wear.

The pictures above were taken the last week of January when an unexpected ice storm shut down Birmingham for three days. Folks north of us are free to make fun of us for the panic that accompanies snow. Most of the news reports I read and heard said snow was crippling the South. But it's not the snow we worry about. We worry about ice and hills and cars that don't have 4-wheel drive and drivers, especially the drivers, who don't know how to drive on ice. If there is a chance of snow and ice, we are closing up shop, emptying the grocery store and settling in for a cozy few days at home.

The most upsetting part of the January 28 clusterflake for me was the few folks who said gee, if you knew it was going to ice why was everyone out in it? Because we didn't know! The storm line shifted and by the time we went to get the kiddos out of school the roads were iced. Had we known the whole city would have been home. Instead we're going to be talking about the ice storm of 2014 for a long time to come. Where did you abandon your car? Where did you sleep? How long did it take you to get home? (I actually got the van home, even up the hill. It took an hour to drive from school, normally a 10-minute trip — I was already at school so I didn't have to fight traffic and ice to get there. We got home before the roads completely iced over, blocked by abandoned cars. Our story is nothing compared to the ordeals of others walking miles to get home, their kids spending the night at school. For that I am grateful and oddly jealous.)

We'll be glued to the TV Thursday watching polygons and hook echoes as the squall line moves through. We may have been a little unkind to our local weather gurus after the ice storm but we'll listen to every word they say, all misunderstandings about a "dusting" of snow forgotten.
Posted by Christina at 9:04 AM 1 comment:
Labels: Birmingham, ice, snow, tornado, weather
Newer Posts Older Posts Home
Subscribe to: Posts (Atom)