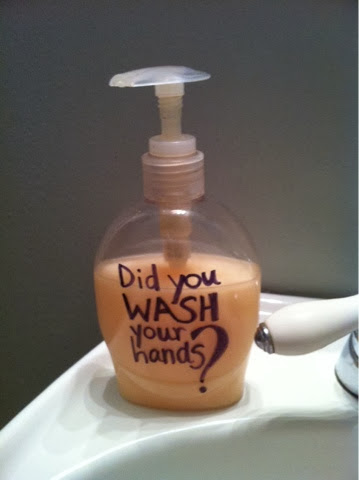 I really do remember how many times my mom asked if I washed my hands when I was little. Because it was a lot of times. Heck, she still asks me every now and then! And now, I sure do grab my little guys' hands to see how wet they are and if they smell like soap.

The sticker labels of the Wal-mart brand hand soaps come off very easily. I thought about getting a friend with a vinyl machine to make the letters for me but then I thought, what can't I do with a Sharpie?! A few minutes later, voila! Less than $2 for custom mommy nagging. And, it's refillable. 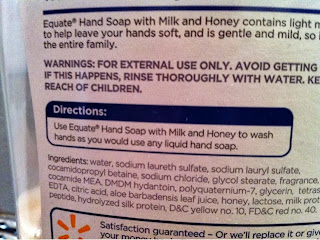 Made by You Monday

Do you remember this box? It came into the living room in January after a neighbor took delivery of some large furniture. After eight months it was starting to fall down and wasn't played with as much. It was time for it to go. Several times I told the boys the box was going to go and there were small protests or I would think in my head, it's time, and then come in the room to find Joseph playing in it. For it was Joseph's box — he claimed it and didn't really want to share with brother. So if Will played with it, he was usually doing so with Joseph and not on his own. Will did try to sleep in it overnight a couple of times. Attempts that were quickly abandoned because hey, that floor is hard!

It was a jail, a helicopter, a hospital, a snuggle spot — it stretched the imagination! Which is why I let it "clutter" the living room for so long. Our house is not big and the box made it even smaller. After seeing how much fun the boys had with it, I think it was me who was having a tough time letting it go.  Because when they came home one day in September to a much larger-looking living room, they paused for a second and moved on.

The box was moved to the backyard where it lasted for a few more days. Then moved to the curb for recycling. But the memories will remain hopefully for the boys but definitely for me ... I'm going to go now before I get too weepy about watching their childhood pass, that it's going too fast.


Posted by Christina at 8:56 AM 2 comments:
Labels: cardboard box, family, fun, Joseph, Will

File under why not? Candy corn pancakes 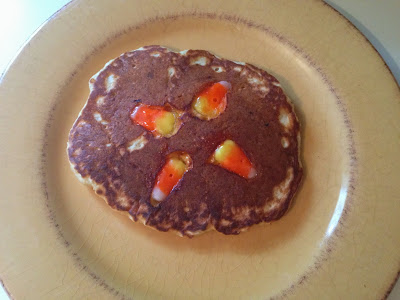 Everyone is talking about apples. No really — everyone. Julia's Bookbag, Design Mom, SouleMama to name a few. So much so that I could't take it any longer and made praline apple bread yesterday. I subbed cream cheese for the sour cream which was okay but not life changing so not planning on doing that again (picture and recipe if you follow the link. I promise it is delicious and even more so if you have the right ingredients on hand). I thought about taking a new picture of the apple bread (mostly because I forgot I already had) but too late now because it's gone.

But I did take a picture of the candy corn pancakes I made last weekend. When Joseph was three, he woke up everyday asking for candy. EVERY DAY. I am not kidding. It was infuriating because dude, in what world do you think you will get candy for breakfast? You're lucky you get your Lucky Charms. (Which, those days are numbered. Tried of him only eating the marshmallows. Come on, that leaves hardly any for me!)

He's stopped asking every morning for candy but man, last weekend he was really, really wanting the candy corn sitting on the counter next to the chocolate chips waiting their turn to melt into yummy pancakes. So I thought, let's make a candy corn pancake. That should satisfy the demanding tyrant at my elbow. HA, yeah right. Joseph was not going to try it. But I did. And surprisingly, it was not bad. The candy melts just enough that it tastes like the syrup is in the pancake instead of drizzled on top.

Here's what I did — First, I did not mix the candy corn into the pancake batter. I laid out of few candy pieces on the griddle and then spooned batter on top. I know, easy. So easy that I'm sure I am not the first person to make these.

Would I make them again? Actually, the answer is yes. A nice treat for Halloween morning or just any fall morning. What do you think? Would you try them?