Notice this new little button on the side?

Aimee at Adventures and Pursuits is behind this fun postcard swap. I love getting mail and so does Will (okay, not as much as momma). As soon as I saw this swap, I knew I wanted us to participate. Aimee had such a response that she organized not one but four groups of swappers. We mailed out 40 postcards last week and should get one back from most of the other 49 states in the coming months. I say most because our group is missing a few states and each group is missing North Dakota.
Now I need to print up a map of the United States. As we receive a postcard I plan to spend a few minutes talking about the state and looking at how far it is from us here in Alabama. I'm pretty good with geography and maps. I loved looking at license plates when I was a kid and at one point earned $5 from my dad by learning the state and state capitals. I'm not going to make Will do all that but he is ready to learn about the wide world that's out there waiting for him to conquer.
Posted by Christina at 9:38 AM No comments: 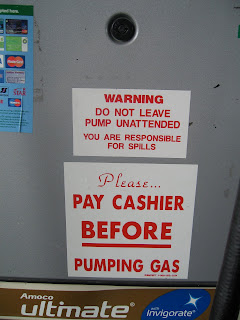 Photographed this week at BP gas station in Mississippi (BP owns Amoco). I'm sure you can find the same sticker on gas pumps across the nation. I don't want to get heavy-handed. I'm waiting patiently to see if BP acts responsibly in the Gulf of Mexico. If not, my list of places to get gasoline will shrink again (I haven't bought Exxon since their big accident in 1989).
But I teach my children that if they make a spill in the house, they need to go into the kitchen, grab a towel and wipe it up. Or tell momma. They know not to leave a spill to sit and get all sticky. So yes, I expect adults running a rather large company to do the same.
I'm watching and waiting.
Posted by Christina at 12:21 AM No comments:
Labels: BP, gas spill, opinion

So I still have birds on the brain since I'm going with a birdie theme for Joseph's first birthday party. You might think this is a new thing for me but it's not and I thought I would prove it. This is one of my favorite posters for kids by Robin Rosenthal. I love this poster so much I wrote fan mail. Yep.
When I found this poster several years ago, it was like seeing an old friend. That's because I had seen Rosenthal's work (and lots of it) in my much-loved copies of Martha Stewart Kids magazines. Sadly they no longer publish Kids and I miss it. It was well done and full of fun stuff to do together (dorky inside joke because that was the magazine's tagline.)
Isn't it cute? And it comes in pink too.
Posted by Christina at 11:04 PM No comments:
Labels: art, Martha

Rainy, rainy Sunday here. Not as wet as some places — my mom saw more than eight inches in Memphis, south of Nashville saw more than 12 inches of rain!
We had already decided after some discussion that we were ready for Will to watch Star Wars. Most of his friends have seen it and they have been telling him about the characters. He even got a lightsaber from one of these friends for his birthday. So we thought a nice, quiet rainy Sunday would be the perfect time to pop in one of our favorite movies.
Ironically, we don't own Star Wars. Well, we do have it on VHS but that's not hooked up (anyone still using VHS?) and Chris at some point bought one of the prequels on DVD. But Will is going to watch Star Wars the way we did so off Chris went to Blockbuster to rent A New Hope. Which will always be the FIRST ONE to me!
It was so sweet when Chris got home with the movies (because if you are going to rent Star Wars you might as well rent Empire too). Chris handed them to Will for a big "surprise" moment but Will just brought them to me saying, look what daddy got for me to watch when I'm bigger. So we sat down with Will and told him that we DID think he was big enough. It took a second but Will got excited when he realized what we were saying.
So we settled into the couch with popcorn and got ready to share this wonderful movie experience with Will ...
And 10 minutes later he wanted to go back to watching Olivia. We begged him to give it a few more minutes. "Come on Will, Luke is coming up. At least see what Luke looks like." But it was no use. He declared that he was not big enough to watch and reluctantly, we let it go. 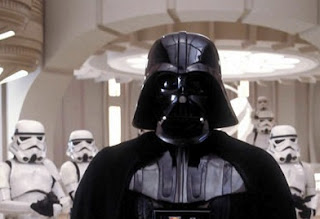 Maybe next time, daddy shouldn't start off a movie by telling Will, "it's a little scary."
* For more awesome Vader pictures, check out Dave Prowse's official site. James Earl Jones may be the voice but Prowse has the moves.
Posted by Christina at 9:01 PM No comments:
Labels: family
Newer Posts Older Posts Home
Subscribe to: Posts (Atom)