Once again, here are the books that had us entertained in 2012. Previous lists here and here.

Joseph enjoyed hearing "The Three Bears" over and over. And if we weren't reading "The Three Bears," then mommy was re-telling the tale with much ad-libbing. One day Joseph suggested the three bears should really lock the door the next time they leave the house. I had some discussion with friends on Facebook as to what IS the moral of story? Is it lock your doors? Don't fall asleep while robbing a house? Buy better furniture?

"Nobunny's Perfect" by Anna Dewdney (of Llama, Llama fame) got checked out again and again from the library. Thanks to MayMay we got our own copy for Christmas. Joseph also loved "Big Mean Mike" from the library. I randomly picked it up off the new arrivals shelf only to come home and see that bunnies play a big part in the story. Yep, we're still surrounded by bunnies. 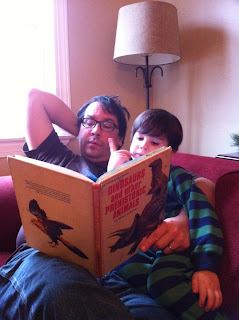 And dinosaurs. Joseph likes the "How do Dinosaurs ..." series by Jane Yolen. But his favorite dinosaur book is an old, scruffy one he found at the thrift store, copyright 1971. It's for much older readers so I thought it would be forgotten after we got home. Nope, he pulls it off the shelf again and again. I admit to passing most of the reading of the book off on daddy.

Will dove into the Magic Tree House books. And hasn't meet an Eyewitness book not worth flipping the pages. It was really amazing how boom, one random day his reading skills just took off. Like a switch. Now he's reading chapter books and acing the tests on them at school. We still read to him nightly, after he reads to us. "Ma Lien and the Magic Brush" (1968, Parents' Magazine Press) became a favorite thrift store-find. Again, I tend to pick up any PMP book I see and nine times out of 10, it's a keeper.

Much to mommy's happiness, I found the reincarnation of Douglas Adams, and his name is Jasper Fforde. I'm late to the party because the first book in the "Thursday Next" series was published in 2001. After I devoured all that was available, I picked up the next book by Fforde sitting on the library shelf, "Shades of Grey." The writing is fantastic, the plot complex and I was soooooo mad to come to the last page to see sequels mentioned but not yet written. Not to be confused with that other "50 Shades of Grey" which I will admit to reading. There are at least six Fforde books I haven't read yet so that should keep me busy in 2013. And I'll probably re-read all the Thursday Next books too. When I really love a book, I tend to read it too fast (and way into the night) so a second reading is always good.

Was there something you really enjoyed reading to others or by yourself in 2012? Got a long list for 2013 already? Please share.