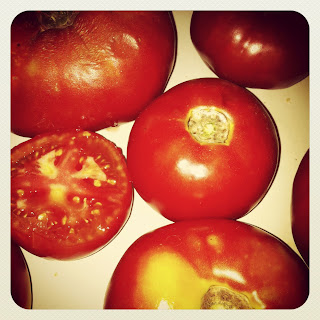 Last month I brought home some garden tomatoes from Mississippi.
So many that I thought filling the freezer with tomato sauce was a great idea. 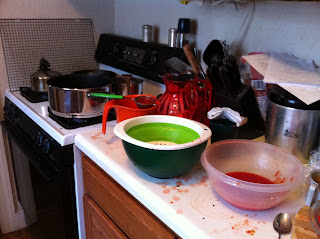 Three hours later I had one messy kitchen.

What was I thinking? That it would be a fairly easy project?! For one thing, all that work and time resulted in one measly cup of sauce. Now granted, it was a really, really yummy cup of sauce (recipe from Smitten Kitchen) that Chris and I enjoyed for dinner. The boys wouldn't touch it with a 10-foot pole, but that's nothing new. It was my first time making sauce and I had no idea that once you get rid of the juice and seeds, there's not much to a tomato. I give myself an A for effort. And the permission to keep enjoying the stuff from the jar.
Posted by Christina at 9:05 AM
Labels: cooking, DIY, food