I occasionally write down blog post ideas on random to-do lists. Every now and then I'll find an old list and think, "oh yeah, I should write about that."

(I should really just print out a bunch of these. Or use the notebook I set aside for blog-related musings.) 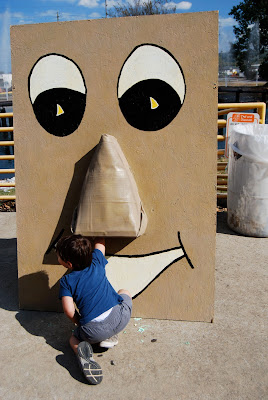 I was going to share this picture in October, but then the storm of the century hit and all blogging non-storm related was postponed. Sloss Furnaces hosts an annual fall festival in October full of games and craft activities for the kids. This is what I've dubbed the Snot Monster and each year it's been Will's favorite thing. When you go up to the monster, it sends silly string and candy out its nose. For a 4-year-old, this is the height of entertainment! 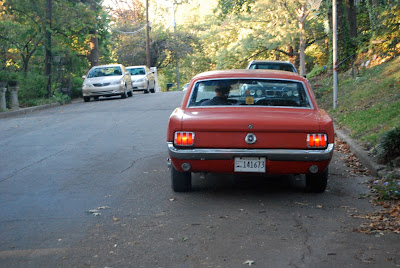 This is a picture of my 1965 Mustang. Actually, it's a picture of what used to be my Mustang driving away. Yes, MY Mustang and not Chris. Chris helped me find it but it was my daily driver for a few years way before the kids arrived. We toyed with the idea of selling the car for a few years but then we would take her for a spin and think next year we'll get the shocks fixed or body painted. But we finally admitted that she needed more care than we could give and my uncle was looking for a project. He came to pick up the car in October. At least the car stayed in the family and I'll get to visit her at Christmas. 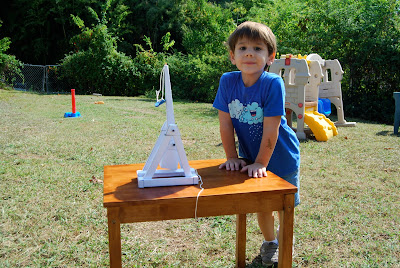 More from October. One day Will asked if we could build a trebuchet. Stupidly I said sure. I found instructions for a paper model, printed out the parts and quickly starting cussing up a storm. Be warned, the instructions are rather loose. I had to make some of it up as I went along. Will helped cut some of the pieces out but it really was a mommy job. Then I thought about making it a daddy job but by golly I was going to finish it myself if it was the last thing I did. It took weeks because there was one part I couldn't figure out but finally got it. It worked okay. We did throw a grape seven feet. With tweaking, it could work better. Find the instructions here (you can also download it here). 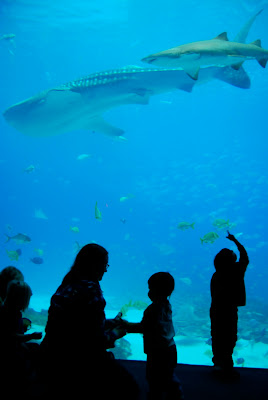 I'm just including this picture because I love it. That's me and the boys at the Georgia Aquarium in November. It is truly is an amazing place. Both boys enjoyed the visit. It was Joseph's first trip. He loved watching the fish but his favorite part was talking to the penguins. Will got a special behind the scenes tour from one of the volunteers just because she liked his questions. My curious boy always has a million questions! (The volunteer told us that each day a different volunteer is allowed to take whoever they want behind the scenes. What a special treat! Usually you have to pay for such a tour.) FYI, if you are planning a trip with kids, be sure to ask about the Mommy and Me ticket. It's a great deal and includes parking.
Posted by Christina at 1:52 PM
Labels: family, random thoughts