Just what I wanted

Do ever wish you could move into the Pottery Barn catalog? Actually I'm not that picky ... I would be fine with Land of Nod or Restoration Hardware. But we all know the real reason those rooms are clean ... they're not real. Real rooms have a trail of crumbs leading to the toddler holding half a cracker. Real rooms have a least four missing toy parts under the sofa. Real rooms can be clean one second and then look like a F4 tornado struck. I like my real rooms ... but a girl can also dream as she thumbs through the pages of a magazine.
I have long wanted the Collector's Shelves in the Pottery Barn Kids catalog. I finally got around to asking my uncle to make one for Will's room. My uncle is extremely talented when it comes to wood and can make just about anything. It took longer for the paint to dry than it did for him to build.
Chris installed it yesterday for me. It's a little higher than I would have liked it. Being next to the bed, he was worried that Will would roll in to it and hurt himself in the middle of the night. I wasn't mad when it wasn't hanging where I suggested — that's what dads are suppose be, protective of their little ones. 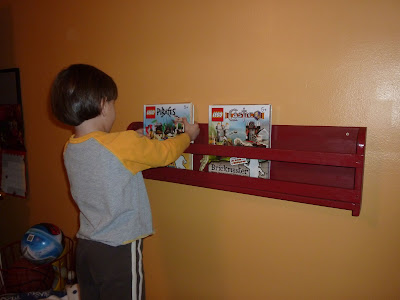 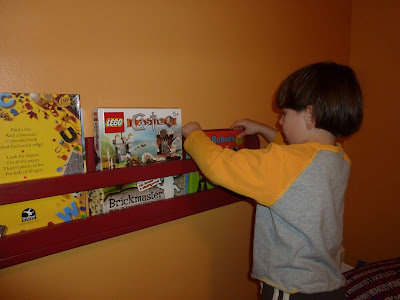 Will immediately filled the shelf with his favorite books. I also intend for library books to hang out here so they don't get lost among our books.
I like it. But now I'm thinking we need another one to hang above it ...
oh Uncle Bill ...
Posted by Christina at 8:38 PM
Labels: books, decorating, DIY, Will