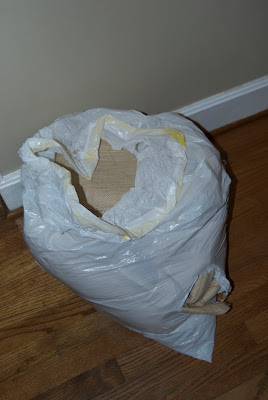 I have a ton of burlap. No really, more burlap than is normal. Being that our wedding was a very DIY affair six years ago, we bought burlap to make tablecloths instead of renting them. Thanks again Mom for making them! And for making the curtains that now grace the living room and dining room windows. I was having a tough time convincing Chris that burlap curtains were very chic until I showed him several high-end store displays.

I keep seeing craft after craft on the Web featuring burlap so I got Mom to bring me what was left of the burlap the last time she visited. First time I reached in, I pulled out a length of burlap that was just the right length for a table runner. While that was not the project I planned to do that day, it quickly became the next project on the list.

After the storm of the century, we had a ton of leaves everywhere. So I gathered some, slapped a lot of paint on them and voila ... 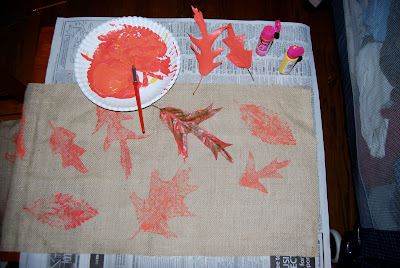 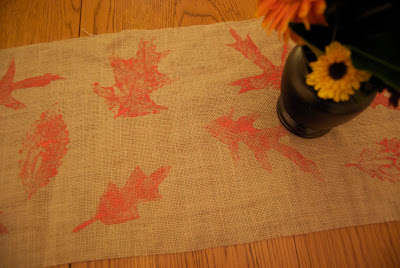 I had asked if Will wanted to help and he said no. So I spent a very enjoyable Thursday night watching TV and crafting by myself. Very enjoyable. I realized that not every craft has to involve the boys — mommy can have her own fun too.
What I learned from this project: 1. Yellow paint doesn't show up well on burlap. I mixed up orange instead. 2. You have to really, really layer the paint on the leaves. They seem to suck it up quick. 3. You really have to press the leaves hard for a good imprint. 4. Cutting burlap is no fun. Here's the secret.
Here's another project from the wedding ... I was going to share it in a different post but it fits today's fall theme. 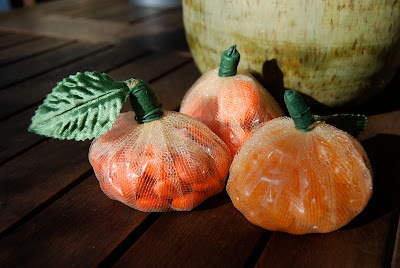 For wedding favors, we (we being several friends, we made an afternoon of it) wrapped three different candies — orange M&Ms, orange jelly beans and orange mellowcreme pumpkins — in plastic wrap and orange tulle, wrapped the stem in floral tap and added a leaf.  I think they turned out very cute. These particular pumpkins still reside in the fridge. Didn't really mean to keep them so long ...

I also linked up to
DIY Fall Festival
Get your CRAFT on! with Today's Creative Blog
Posted by Christina at 9:22 AM
Labels: crafts, DIY, Fall, leaves