Lego party for Will

Every year when I start planning Will's birthday party, I'm reminded that I didn't post about last year's party. So here is the big Lego party for Will turning five ...

Legos are quite the "toy de jour" for the 4 to 94 age group these days. Our house is not immune to the power the little bricks possess. I knew it was just a matter of time before we had a lego party.

Party breakdown: I kept the party small by inviting just five friends. Chris made a really cool invite with the words "come play" built out of legos. I'd share that with you but of course, I can't find the image now. We started off with some free play (it was suppose to be a game where one person builds, passes it on, the next person adds to the design, and so on but I think the boys were too young for the idea. Besides, free play with legos is always creative.) Next we went outside to hit destroy the piñata. Our lego store was kind enough to give me store bags for the boys to fill with candy. Back inside we sang happy birthday and ate cake. Will had a great time so that always makes the party a success for me. 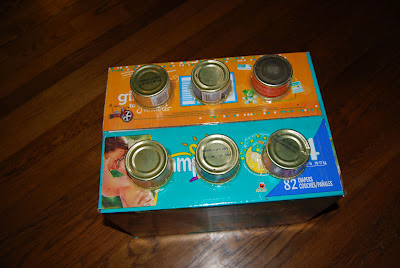 To make the lego piñata, I taped empty cat food cans to a large diaper box and covered it with orange streamers. It was very sturdy ... 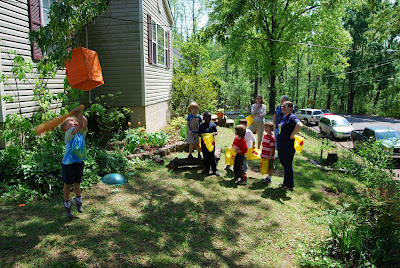 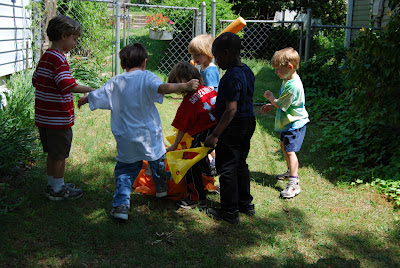 While the bat wouldn't break it, six determined little boys did! 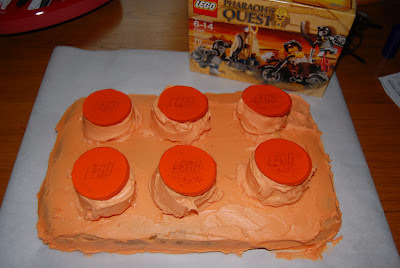 Here's my attempt at a Lego cake. I kept some of the cupcakes home from the batch I sent to school to make the knobs. I ran out of time to hand write Lego made it easy on myself and printed out the Lego logo to put on top. 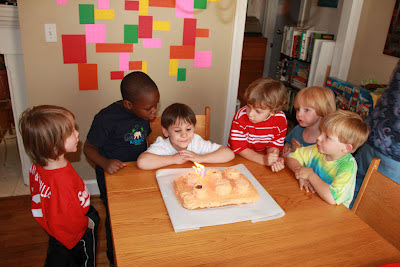 I decorated the wall with more Lego knobs. It was very colorful! 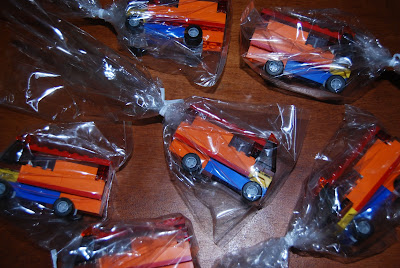 Chris loves legos too so I put him in charge of the favors. He used the pieces on our Lego store's pick a brick wall to design a cool van for the boys to take home. Added to their piñata candy and rounded out with Lego Club magazines and catalogs, free from our store, it made for a nice favor bag to take home. 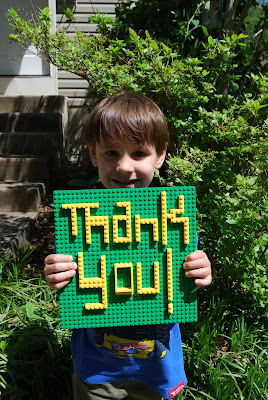 I intended to print this photo for the thank yous but didn't get it done. Oh well.
(He did send thank yous, just not this super "cool" one.)

Many many thanks to Delia Creates. I pretty much used all her ideas!
Posted by Christina at 10:03 AM
Labels: birthday, legos, party, Will