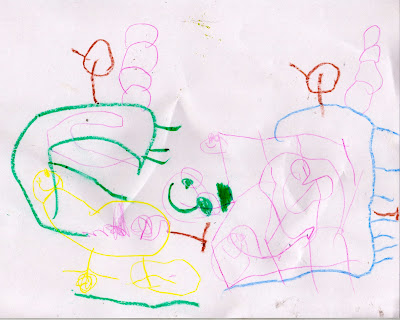 By William Tutor, age 5
The bird is afraid the scary monster is going to eat him, but he really wants to play tag you're it.
The bird gets skis and a jet pack. He's carrying squash and a tomato.
Now the bird has a tail shaped like a pick ax mining for crystals while skiing with a jet pack.
And the monster has all of that stuff too.
And now they both have satellites.
The one-headed monster turned into a three-headed monster.
And then the bird ate the squash and tomato.
And then they started having four snowballs on them.
And then the bird realized the monster didn't want to eat him, he just wanted to play with him.
THE END
Posted by Christina at 1:23 PM
Labels: Will