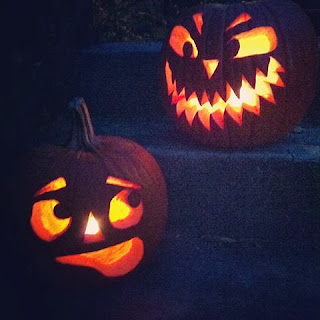 What's that you say? Halloween was two weeks ago? It ain't over until I document it. Which means Halloween 2012 is still going strong. I sure thought I had posted pictures. There is at least one photo of Will.

Halloween this year was ... interesting. The four-year-old took full control of his costume. While Will always picks his costume, Nana or Mommy are the ones that make it appear. Not so with Joseph. He had an idea and told me what he needed to be an American Striped Fox.

No, it's not a real animal. See Joseph got a stuffed tiger for his birthday back in May. Striper immediately joined Baby Bunny and Joseph on all their adventures. About a month ago, Joseph declared Striper to be an American Striped Fox. (And no, he had not seen "What Does the Fox Say?"). Forget the Batman PJs already picked out, Joseph was going to be an American Striped Fox too. So basically, Joseph dressed up as his favorite stuffed friend. Sweet, I know.

But Halloween was coming fast. How could we pull this off? I told Joseph I would be happy to make his mask (I'm thinking felt, thread and a couple of nights in front of the TV) but Joseph ran to his room bringing out the mask he decorated at Art at Avondale Park the week before. I got red sweatpants and a turtleneck at the big consignment sale. Joseph helped paint stripes of yellow, orange and black. The tail — oh, I love the tail — was sewn in five seconds by a willing friend who knows her way around a sewing machine. It is a red T-shirt stuffed with polyfill. She sewed the tail to another strip of T-shirt so it was easy to tie around Joseph's waist. He decided not to paint it. Again, he knew what he wanted.


Will's costume was a little easier. Nana got him some skeleton PJs (PJs are the best for costumes —you're already dressed for bed!). But to make it a little more his style, Will wanted to be a Minecraft skeleton. Not familiar with the computer game? Just ask any little boy ages 8-12 within 30 feet of you (and probably their dads too) and they can tell you all about it. (If you are curious, Will only plays the creative mode, no mindless destroying of things/animals is allowed, and a majority of the time Will is playing next to a parent with a watchful eye. We like Mindcraft for the building aspect. Dad and son are working on an elaborate town — it even has an art museum.)


Like Halloweens past, we hit the school Harvest Festival the day before and then on actual Halloween night we walked our street with our neighbor pals and then headed two streets over to walk a few more streets with a longtime friend that has a street as nice as ours. Meaning the neighbors know the kids are coming and have goodie bags or full-sized candy bars waiting. Both boys got plenty of candy! The night ends back on our street at Mavis and Shea's annual Harvest party complete with apple bobbing and hot funnel cakes. After inhaling a bunch of sugar and maybe two bites of apple, the boys go to bed and then mommy does the importing job of "sorting" the candy. One of the best nights of the year!


The candy is not even all gone and Joseph is already thinking ahead to next Halloween ... 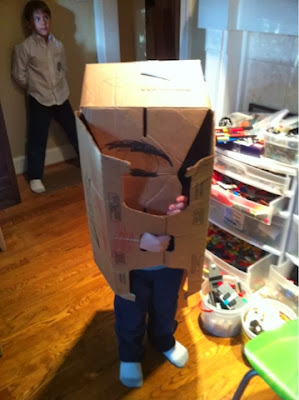 He's going as a Beetle Slug!*

*I'm told they wear yellow pants and like to use their amour
to defend themselves from big brother attacks.
Posted by Christina at 9:42 AM
Labels: costume, DIY, family, fox, halloween, holiday, Joseph, Mindcraft, Will